Today we crossed the Greenwich Meridian back to the Western Hemisphere and nothing very nautical happened other than we headed for Ouistreham.

Leaving Le Havre we watched the start of a solo 400 mile race which takes yachts on a non-stop sail  to Cherbourg, then to somewhere off the coast of Cornwall and back again which makes us look fairly pathetic sailing wise.

This time Ouistreham was only three hours away so we shouldn’t have the restrictions of the sea lock timings of two days ago.    Once inside the lock the Canal De Caen a La Mer would take us to Caen city centre however Ouistreham lock was our next obstacle, which is a bit of a monster compared to the previous ones encountered.

At this point I’m not going to bang on about being British (which means I am) but we do love a queue, and if we can have a grumble as well it’s a near perfect day for us!

Having negotiated quite a few locks by now, I’ve noticed a distinct difference in boaters’ approaches to them dependant on what side of the channel you happen to be.   In Ipswich, Eastbourne and Dover when the lock/gate opens the British skipper seems to have a sixth sense as to what order they arrived in and as if by magic, and in total silence apart from the occasional ‘After you old boy’,  everyone enters in a formally pre-agreed holding pattern and incorporates the unique system of ‘first in – goes to the front’, leaving room behind for others – genius !

This is not however the French way.   The accepted practice here is that the moment the lock gate starts to open, irrespective of the boats inside trying to exit, with red traffic signals facing him and equally with no recognition of his arrival number, the French boater is already en route.   Having weaved his way passed the outgoing vessels he will plant himself in the centre of the lock with not quite enough space in front or behind for anyone else.  He then ties a single line to the boat allowing it to drift about a bit and disappears down below to smoke a Gauloise and mourn the loss of Jonny Halliday.

To illustrate further I have attached some photographs of ‘alternative culture parking etiquette’ – can you spot the French boats? 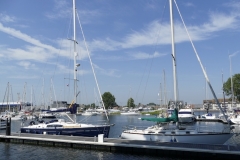 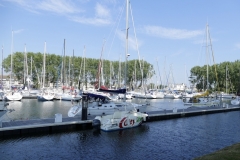 Today was one of those days when things fell into place for me and from out of this jostling mayhem I found myself leading the way with Le Jouannet which I glided to the front leaving plenty of space behind.  Surely, I thought, our European brothers would have seen this uncomplex demonstration of ‘Queueing’ and their lives would be changed forever.   Over the next 10 minutes I realised my missionary work to this corner of the globe was pointless and its only by sheer luck that the majority of the boats were even facing the right way around when the carnage was over.

Just as this this Chinese puzzle settled down, from over the radio we heard that a Dutch Yacht, ‘Scaramouche’, was still making their way through the approach channel and the lock keeper agreed to wait.  There was clearly no space to attach to the lock wall so rafting against another boat was their only option, which is always a bit tricky.   It was at this point that the Gaelic shrugging started (see blog : Boulogne) and not wanting to be involved most skippers simultaneously disappeared below or looked away.

We  (who are constantly on the look out for new ‘boat-friends’) beckoned Scaramouche to raft alongside us.   Effortlessly, the skipper slipped past the awaiting armada and landed expertly alongside.    It was only now with a sense of satisfaction that it became apparent that the British and the Dutch sat side by side at the front of the lock and in Pole Position for the marina with its limited availability.

When the gates opened, and in our own good time, we moved slower than an asthmatic snail and grabbed the last two spaces on the pontoon.    An hour later we were kidnapped by Dr Nicole and Dr Henk, the crew of Scaramouche, to celebrate our 2-0 victory over the French with copious beer, wine and Saucisson.

We have now established a little known fact that everyone in Holland claims to be Doctors and they all own yachts.