We exited Eastbourne Lock and wiggled our way around the mud, that appears at low water, and headed in the direction of Dover.

Met with glorious sunshine and a feint breeze from the South West our next navigation point was Dungeness.  This was spotted just after the conclusion of BBC Radio 2’s Pop Quiz (That’s 1045 hrs BST) we then spent the next four hours looking at it ahead of us, alongside and behind us.   All angles were discussed, and we agreed that it’s a very ugly building and so we pressed on.

Now Dover entry is a bit of a mixed bag of fun, the more you read about the process the more it could put you off, especially when you add in jostling ferries, confused seas, having to monitor two VHF channels and a rip tide across the entrance which required our poor Yanmar engine to reach revs rarely seen.  Once we’d tied up and picked up most of the kitchen ware from the floor we were almost immediately  approached by the Border Agency who were convinced we had just come from Germany!   When I pointed out it was unlikely to be us and perhaps the boat next door, named ‘Das Speil’ and flying a German Flag could be the suspects they were looking for….. one has to say … ‘Elementary my dear Watson” 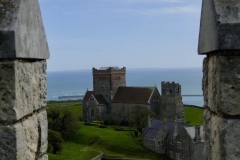 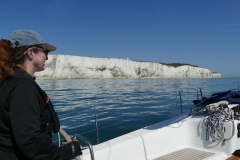 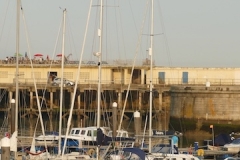 So a quick trip round Dover Castle and the White Cliff Tunnels from where the war office orchestrated ‘Operation Dynamo’ in 1940 and the evacuation of 340,000 Troops from Dunkirk. From the ramparts we eventually got to see France, which is about as close as we’ll get to it this year.

Morning came and Nina helmed us out of this chaotic harbour and we skirted the White Cliffs of Dover and made way to Ramsgate – where we arrived on the hottest day of year (so far).

A coastal stroll to Broadstairs was a must after we discovered that both of us had childhood holidays there in those days when the summer lasted for ever and a bucket and spade, and perhaps a pack of small flags, was all you needed for entertainment.  No trip here is complete without a Morellis ice cream – this iconic Ice Cream Parlour hadn’t changed from the 70’s when our parents would enjoy a frothy coffee, served in a glass cup and saucer, and a knickerbocker glory that would tower over your eyes served with a spoon as long as your arm. 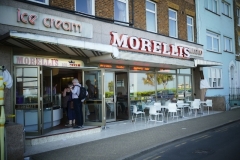 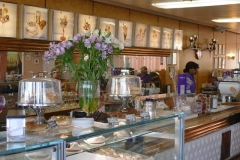 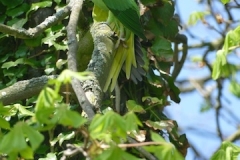 You would think that this and a trip to Deal Castle was enough excitement for four days but then the Welsh turned up in the form of my ex-ARC crew mate Mark Chamberlain who was skippering ‘Admiral P’  en-route to Grimsby.  Now ‘Admiral P’ is a ‘boys toy’ to die for and services wind farms up and down our coastline. To get some idea of power, he’d only set off from Torquay that morning and by 8pm we were all in Weatherspoons re-telling yarns of our Atlantic crossing to the Caribbean …. It wasn’t long before Nina and Marks’ crewmate, Ed, had dozed off! 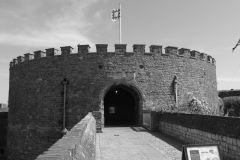 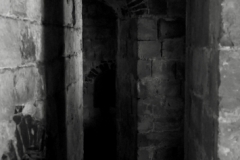 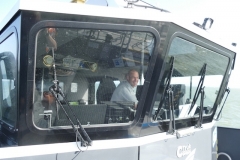