Another uneventful windless, flat sea, foggy passage greeted us as we said goodbye to Dieppe with the intention of making it to either Ouistreham or Honfleur.  It was a longish passage which relied upon some wind to maintain speed and without it we dropped behind schedule and had to dive into, the eye-watering expensive, harbour of Le Havre instead.   Within the mist, and where birds become disorientated, we had yet another stowaway crash on board.  Our kindness in feeding this little chap was repaid by him emptying his bowels onto our ropes several times.

So Le Havre it was for a couple of days which was surprisingly pleasant albeit a bit of a concrete jungle, apart from the amazing Jardins Suspendus.   This crumbling 18th century fort which overlooks the town has been given a new life and now houses plant collections from all over the world both outside and in greenhouses which seemed the perfect place to visit on a day touching 35 degrees.  I won’t complain about the heat and rest assured re-hydration is never far from our minds and always taken seriously ! 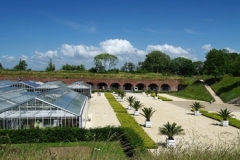 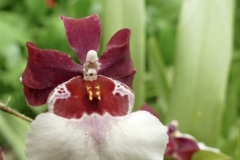 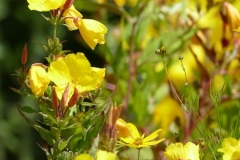 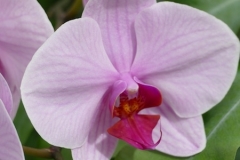 The volume of shops here brought forward a problem which I’ve been trying to avoid but now it was staring at me in the face.    Seeking medical treatment?  Finding an engineer for the boat, I hear you ask ? …… No, it was much worse than that – it was trying to get a haircut when you don’t speak d’lingo….

I’m aware that my male modelling career has long since passed but when Boris Johnson looks marginally smarter, it’s time to take action.   Armed with the simple and reliably unreliable google translation of ‘haircut’ (‘La Coupe de Cheveux’ if you didn’t know!) – which I have to admit sounds more like a 1970’s Chrysler, I went into town alone as Nina couldn’t be trusted not to giggle.

Le Havre, and indeed France in general, seems to be awash with hairdressers – so spoilt for choice I did a random flyby of a few establishments with the briefest of glances to assess if they looked likely to speak English.    Realising that I didn’t know what an English speaking, French hairdresser actually looked like, I was then concerned about the ‘Police Municipal’ being alerted to some scruffy long-haired foreigner loitering around salons and staring at staff!  At some point I was going to have to walk into one of these establishments and just man-up.

To explain the courage required further I’m appealing to the male readers here…… Take yourself back to your teenage days and that first purchase of condoms.   Just to be safe, you’d already travelled three districts away from home on the bus, walked past the Pharmacy several times wearing a trench coat with the collar up and when you eventually plucked up the courage to enter the rather loud lady who served you turned out to be your infant school dinner lady who instantly recognised you because she meets your Mum every Friday at Gala Bingo.

So, we’re at that level of courage required but I’m now 40 years older.

I eventually found a ‘salon’ that was empty (there’s an indicator) and entered.   I was, shall we say, over enthusiastically welcomed by ‘Sebastian’.   My investigative skills told me, that Sebastian had only just returned from his annual pilgrimage to the Eurovision Song Contest and from here on ‘Seb’ and I proceeded to bond like Sellotape underwater.    (NOTE : Anyone who runs his hands through my hair with such passion I feel I have the right to call a close friend and reduce his name as I feel fit).     Neither of us spoke even close to a similar language, my school boy French being of little comparison to Seb’s ‘flamboyant high pitched often musical’ dialect, but 45 minutes later of bon homie I felt totally coiffured and left his emporium buffed and gelled.

So what have I learnt for the future ?         Teach your wife, or partner (I’m a modern man) to use clippers and suffer the circumstances, purchase a selection of hats or just go bald for the summer months! 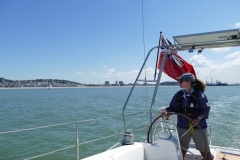 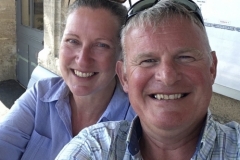