Leaving Sainte Marine and heading even further from home, we detoured via the Île de Glénan for a lunch stop and swim. These islands lie some 10 miles offshore and are just about visible from the mainland. We were drawn here as they are locally referred to as the ‘Breton Tahiti’ and described ‘as close in appearance to the Caribbean without actually being there’!  These 20 or so islands with white sandy beaches are surrounded by turquoise sea and are mostly uninhabited apart from a sailing school which has been resident since 1947. 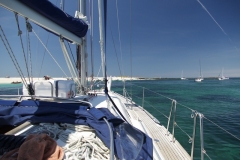 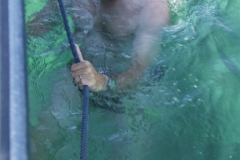 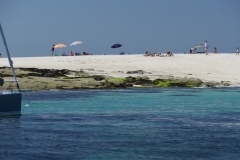 It was a beautiful, hot, sunny day and, as it was mid-week, we hoped that the islands would deliver that desert island feel. And they certainly did!   We managed to find a lovely spot to anchor but within minutes our peace and tranquillity was spoilt by high-speed ribs and power boats using those of us at anchor as some form of race markers often pulling banana-boat riders and water-skiers! And as the wind freshened, we agreed it didn’t seem sensible to stay put for the night so the nearby Île de Groix looked favourite.

The Île de Groix is an island that, like the Isle of Wight, has stood still in time so there was just the slightest possibility that we could be the most fashionably dressed visitors.   The marina is only small and once all the finger berths are taken, which they had by the time we arrived, you are left with ‘trott moorings’ in the outer harbour alongside the Ferry berth.

OK, so how do I describe ‘trott moorings”?  Basically, you attach yourself to two buoys, one to the front and one to the rear which are obviously further apart than the length of any boat.   The instruction books show the technique by means of diagrammatical cartoon characters.

The reason they show cartoon characters is because it is rare that anyone manages this type of mooring without entering a process of progressive frustration evident in all the crews panic-stricken faces followed by raised voices, trial separation and eventual divorce.

The diagrams show a crew effortlessly catching the rear buoy as it passes by and then moving up to the front one which they equally catch first time and then balance themselves between the two and sit down for a cup of tea.

It all sounds simple enough as long as the person who is paying out the rope from the rear has two pairs of opposing arms because whilst his rear set are controlling the rope his front set are steering the boat.   His opposing two sets of eyes (again front and rear) are ensuring the rear rope doesn’t get caught in his propeller whilst the front set keep an eye on his speed and forward progress.

The person at the front is also a mutant with a pair of 15 foot long arms as they only have one shot at threading the line through a rusty old ring on the forward buoy that’s normally lying on its side and which incidentally, is about six feet lower than where they are standing on the bow.

According to the book, this is all done in an air of calmness because all crew have all developed some form of ESP and are receiving subconscious instructions from the four-armed, four-eyed person at the rear.  The sea is also a millpond and the earth has momentarily stopped rotating so there is no wind either …..

Arriving at our night’s mooring we found the wind blowing across the buoys, the tide pushing firmly from behind and all of the trotts already taken with at least four boats on every set.   So, how did it go you may ask…. well, by skilfully identifying the largest boat already secured, and time being the key, we lashed every fender we possessed on the potential collision side and gently landed (controlled crashed) against it (the adjectives used here is still a matter for discussion).   I quickly dispensed of the formal greeting of two opposing kisses with the skipper as, like a slightly overweight gazelle I ran across the back of this boat and grabbed the rear buoy as did my athletic and nimble wife at the front.  The down side was that there was a hideous, indescribable mess of ropes, lines and general knots already on these buoys leading to the other boats.

I have therefore concluded, as it is clearly apparent, why the French adopted the Guillotine as their preferred method of execution as their ropework in the hanging department could only guarantee the condemned man suffer a nasty rope burn and a broken ankle at best as the noose slipped.

Then the wind turned to the north and blew cresting waves into the entrance of the harbour. We then spent a very grim night bumping against the boats on our sides whilst the nose and stern pitched up and down like a see-saw. 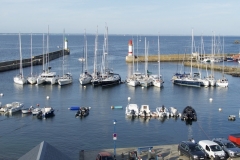 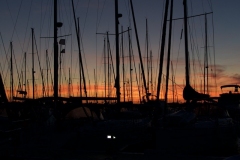 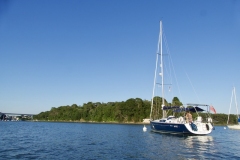 As morning broke we, along with all the other overnight trott-ers abandoned Groix for another day and ran to the River Auray and Bono within the Morbihan.