Entering France’s largest fishing port we were initially directed to moor directly under the concrete ramps for the ferry terminal which wasn’t, I felt, conducive to our continental relaxing experience. We later discovered that the entire terminal had been closed since 2010 when the last commercial ferry left and has since become rather derelict however the Sea Gulls like it! 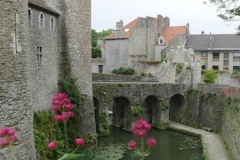 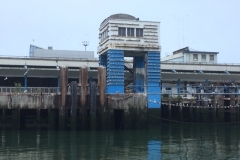 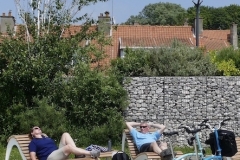 It seems that both of us have fond memories of day trips here, which was often your first foreign experience.  These were the days when you could get a day passport,  you’d have to order your Franc’s at the bank (most of which you brought home because you were too scared to talk to anyone),  your Mum made you a pack lunch to save eating ‘that foreign muck’,  you could only buy 200 Cigarettes (of a French brand that no one had ever heard of),  2 bottles of .. Le Piat D’or .. wine (because the French didn’t want it),  Cigarillos (whatever they were ? But your Dad smoked them anyway),  a flick knife and a lighter.   You could always guarantee someone would miss the coach home and several of those would be drunk having started on the Watneys Red Barrel at 8am on the outbound ferry and had underestimated the strength of French Lager – Happy Times …

Since the last of the day trips came here in 2004, and the Hovercraft (once owned by British Rail) concluded even earlier in 1993, Boulogne has become a shadow of its former tourist destination.   Probably the greatest loss was that I now have no excuse for buying the Sun newspaper to collect the tokens for the £1 ferry ticket.   Who can forget the Page 3 photograph would always be accompanied with wise philosophical words – ‘Keeley’, 22 from Warwick,  38-24-34 on the subject of the Hadron Collider   “I’m so excited that at last we can explore the validity and limitations of the current theoretical picture of particle physics”.   Anything that’s excites Keeley, excites me!

As with all French towns the old city is the bit to aim for and a stroll around the ramparts took us to the Crypt under the Basilique d’Notre Dame.    This Crypt, reported to be the largest in Europe, dates back, in part, to Roman times but has only really been discovered and explored over the past century since renovation work to the church uncovered the entrance passageways. 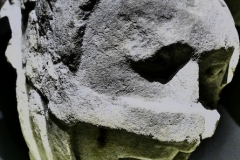 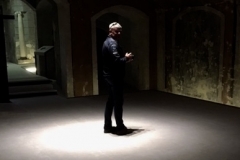 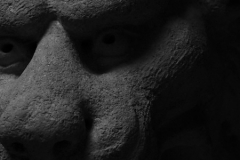 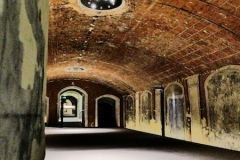 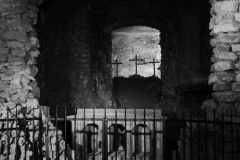 Having fully reacquainted our taste buds with fresh croissants, wine, warm baguettes and French butter again we may have to loosen our belts, as we head off to Le Treport (no we’d never heard of it either until 3 days ago!).