Greeted by a tangerine sunrise we slipped back into the River Seine, turned west and sixty miles later we arrived on the east side of the Cherbourg peninsular and the small port of St Vaast Le Houge.

Yet again, the only wind was in our face and was exactly the same speed as the boat was going – so repeating most of our trips so far, the engine had a good run – one day I promise sincerely to get a picture of this boat sailing!

St Vaast is primarily a fishing village but in the summer months it becomes a centre for yacht rallies and the word ‘busy’ is an understatement. To dodge the crowds and get a space, you’re advised to avoid weekends so arriving late afternoon on a Friday was always going to be a gamble and to find the contestants of the Tours des Ports Manche race starting to gather was a trifle inconvenient. 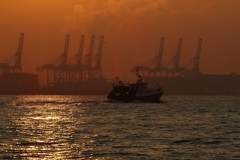 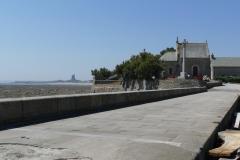 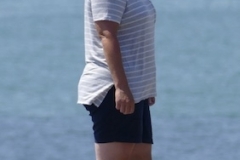 All of the 80 visitors’ moorings had already gone but with a bit of imagination we achieved what can only be described as a ‘Non RYA approved, unconventional mooring situation’, with the use of a lot of ropes and French assistance.   18 hours later, and as more contestants arrived, we found ourselves surrounded with more boats and no hope of escape.

Traditionally, when buried like this (i.e. ‘rafted in’) it is customary and courteous to enquire with the inside boat, which was us, when they intended to depart and the outer boats would ensure that every effort was made to accommodate this.  Our new neighbours realised that we are as shallow as a paddling pool and easily bought by inviting us to their pre-Race Drinks and proceeded to get us so drunk there was no hope of us moving and in any case I couldn’t even begin to work out the knitting of ropes that attached us to them, to each other and to the pontoon.

It was worth getting up at 6am Sunday morning, and truly exhausting, to watch over 100 yachts all jostle out of the marina towards the sunrise and onto their first race to Cherbourg.     With peace descending on this little town it was now overtaken with a strange athletic event.

Dressed in variety of swimwear (Nina did happen to notice how tight some of the male contestant’s trousers were), a crowd of fine looking Greek adonises’ ran across the beach and into the sea for a bit of a splash around.   They then hauled themselves out and ran over the local castle ramparts and then repeated this exercise.     Although Nina tried to towel down a few that weren’t quick enough to dodge past her and now wearing even tighter clothing due to the dampness they trotted off through town and then onto the end of the pier.    For reasons that the spectators understood and applauded, the racers then pulled things out of their previously mentioned skin-tight outfits, whereupon Nina nearly fainted.   They then tied themselves together (and why wouldn’t you?) and threw themselves into the harbour for another splash-about to a nearby Island …. At the end of all of this someone won, someone came second and Nina needed a Gin & Tonic and half packet of Pringles to get over the ordeal –  A curious race these French. 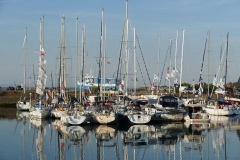 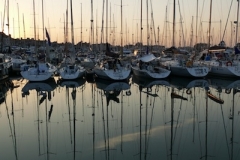 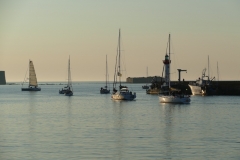 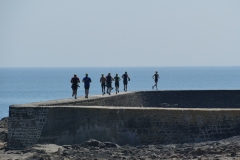 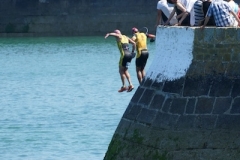 So that was St Vaast.  A lively little place to say the least..