Discarding my newly acquired plumbing skills and a potential career in Gynaecology, we left Ramsgate at 0600 for France and Boulogne. It was a very bright Sunday morning as we said our farewells to the UK for a while.

To say the Dover Strait is a bit of a busy shipping lane is an understatement.  The UK Coast Guard encouraged us to cross the channel at a point just north of the Dover-Calais ferry crossing route.   Not only were we required to dodge through an almost continuous conveyer belt of ships travelling north and south but also the Ferries travelling east to west.   Into this real-life game of ‘Frogger’ we entered being the slowest and smallest vessel.   To add to the fun we had no right of way in this area so had to forget the old rule of ‘Sail has priority’ for a few hours.. 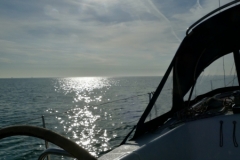 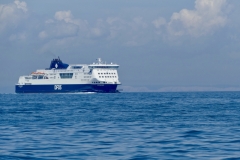 At about 2pm BST – let’s try and keep some form of imperialism here, we made it across and entered French waters at which point we were required to hoist the French courtesy flag whilst still maintaining the British Flag off the rear.  Apparently, there is no necessity to play the 1740 ‘Thomson’ version of ‘Rule Britannia’ anymore during this procedure.

Leaving the chaos of Calais behind we neared Boulogne with our next dilemma of requesting permission to enter the port using VHF Channel 12.

Of the three elements necessary in this next trial I’m fairly good at two – using radios and talking, it’s the French bit that I’m not so hot at.    My ‘face to face’ French, employing the Marcel Marceau art of mime approach and by pointing a lot means I can order you almost anything on a menu.   Radio communications was pushing my boundaries and it was now that I was regretting all those years lusting after Madamoiselle Taylor, my French Teacher in the 80’s, and not paying attention.

I knew it was always going to go awry but we were entering a damage limitation exercise now.  Don’t ask me why I licked my lips before I started, it wasn’t as if I was going to eat the handset!  So with very little confidence, I looked at the control tower, took a deep breath and this is how I was hoping it would go :-

This is what really happened  …

The controller was now thoroughly enjoying himself having missed his calling in life and should have been a livestock auctioneer and not allowed near radios.

Being British, all that was left for me to say was.

With absolutely no idea what we’d been told, I allowed a French yacht to overtake me and followed him in.   I did notice that as his yacht passed the control tower, the skipper merely looked towards it, raised both arms to about hip height, turned his palms to the sky and with his head just tilted to the right lifted both shoulders and with a ‘pff’ sound emanating from his pursed lips we’d witnessed a beautifully executed Gaelic Shrug.    In future I intend to adopt this approach but try not to look like I’m having some form of fit. 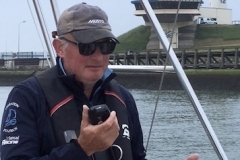 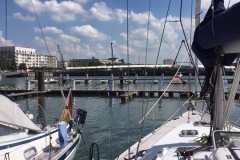 We arrived in Boulogne Sur Mer ahead of a beautiful, warm and sunny evening.