We aimed at Les Sables d’Olonne to meet up with our water tank and more importantly my daughter Emily’s extended French family, and at the same time we pushed further south.

Being a bit too far for a day sail we turned into Piriac and parted company with the region of Brittany and entered the Loire.  The lack of wind on a flat calm sea and a roasting hot sun was one of the key reasons for breaking up the journey but at least Mrs D was happy. 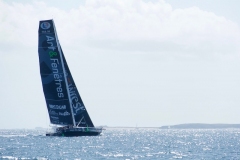 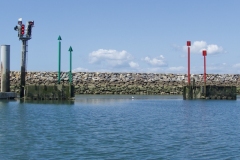 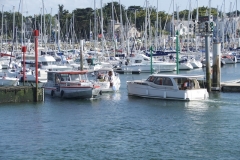 The marina entrance is a curious affair being controlled by a ‘flap gate’ which is no more than 15m wide.  The gate is designed to retain a two metre water depth in the marina irrespective of what’s going on outside.  As the tide floods in the marina the gate descends underwater allowing the previous night’s captive boats out.   At the same time a large LED screen facing the incoming crews lights up showing the current depth over the gate.  And as soon as 1m depth is reached it’s a Les Mans start for the mob outside.

‘Proper boats’ (often referred to as ‘Yachts’) have to wait patiently for the water to rise further due to their keel depths whilst the ‘other boats’ (otherwise known as motor vessels) can slip in ahead and nab all the best spots, or so it seemed.

Fortunately the Harbour Master employs two lads who whizz about in dinghies making rather robust suggestions as to where the motor boats will be mooring as opposed to where they wanted to moor – defy the dinghy lads at your peril !

Historically, and Nina will contest, that I’m not the only man to have bragged about size but for once it paid off to be slightly smaller in certain departments than many of the yachts bobbing about outside and so as soon as 1.9 metre depth appeared on the screen it was full steam ahead and in we slipped ahead of the big boys.

Piriac is classic historical France, the town centre is a maze of winding streets, alleys and squares with elegantly flowered hydrangeas and hollyhocks that add to its charm.     The town square hosts a small stage on which every night was free entertainment. Our visit coincided with three very talented lads playing together as  ‘Sgt Pepper’.  For two hours they performed faultless renditions of Beatles and Simon and Garfunkel tracks and as the strategically placed ice cream shop – ‘The North Pole’ – was alongside the stage it did a roaring trade! 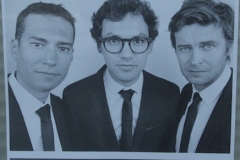 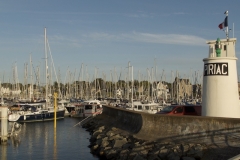 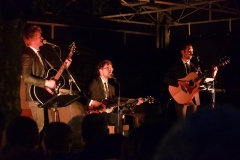 Plodding further south saw us cross the entrance of the Loire River and head to Pornic.  Having crossed the mouth of this massive estuary everything suddenly changed… The light was suddenly brighter, the whitewashed houses were all adorned with terracotta roof tiles and everyone seemed to speak a little slower – It was as if France had relaxed and we’d arrived in the Mediterranean!

Founded around the time when thermal baths and sea-bathing had gained immense popularity, Pornic is a town of the sea, built around a harbour similar to Honfleur and towering over it is the stunning Château de Pornic.

This impressive Château is still in private hands, and was once home to the 15th century French military leader, Gilles de Rais who is thought to have been the inspiration behind the main character in the tale of Bluebeard.   Not a pirate story as one would of thought, but a rather cheerful French romance of a man who married seven times and murdered 6 of his wives for their money. The seventh managed to escape and imprisoned him in the very tomb where the bodies of her six previous incumbents lay!   Rais’ actual crimes far surpassed a tally of six women as after being convicted of murdering hundreds of local children, he was invited to join the hangman at the gallows in 1440.

Pornic’s history is saddened further as the local British Cemetery is the resting place for hundreds of British and Commonwealth soldiers who drowned just off the coast in the 2nd World War. 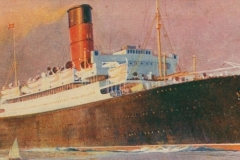 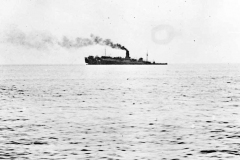 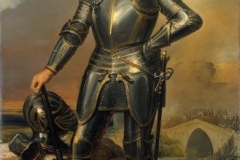 On 17 June 1940 Cunard’s SS Lancastria was bombed off the French port of Saint Nazaire while taking part in ‘Operation Ariel’ which was the evacuation of British nationals and troops from France, just two weeks after Dunkirk.

The SS Lancastria was built to carry around 4,000 souls, though it was estimated that she was carrying in the region of 9,000 when she sunk.   A bomb was believed to have entered one of the main funnels and, on exploding, caused the ship to roll over and sink.   Being unable to launch all the lifeboats, this became the largest loss of life in British maritime history – greater than the Titanic and Lusitania combined.

This is a largely forgotten chapter in British history as Churchill placed a press ban on ‘bad news’ and in his later memoires claimed that with problems in France at the time, he just forgot to lift it.   Survivors and relatives to this day are still campaigning for greater recognition of this tragedy.