Arriving at any marina at night is always a challenge but to arrive at one you’ve never been to before is a good test of the nerves and requires digging into the grey matter to check if any navigational knowledge remains there after all these years.

St Helier has the only deep-water marina on the Island and being August it was always going to be busy but by sheer luck and under the cover of darkness, we managed to grab a quiet little corner spot which we slid into on the proviso that we boosted the islands economy and took advantage of their no VAT charges on booze.  Always keen to help on that score.

Our tranquil little spot was disrupted 2 days later when from between the entrance walls emerged ‘Fenchurch’ – not a person as you may think but what looked like a small helicopter landing platform, thinly disguised as a catamaran owned by Lord and Lady Spencer of Wolverstone (otherwise known as Spencer and Jackie!).

As they drifted into the marina, filling the entrance sufficiently that even a seagull couldn’t squeeze through. They then eclipsed the sun and immediately had the full attention of the harbour master.

I identified the British flag hanging limply from the stern and equally identified the facial expression of the skipper as ‘Sheer Terror’ as there was clearly nowhere to go.  As a fellow skipper and, it’s been said, a frequent user of the ‘Terror Face’, I indicated that we would reposition LJ by moving her back a bit, and thus make room for them.   Lord Spencer immediately saw this as a personal weakness and convinced the harbour master that I was far too working class to share a pontoon with him and demanded I be extradited to a different part of the marina to accommodate this ship of the line.

I do jest as Lord Spencer very quickly came to find us to invite us aboard and forced us to assist them in emptying their fridge of wine and beer, and not once but twice ! 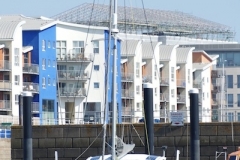 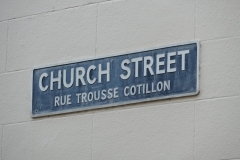 Continuing our travels South meant we would be returning to France in the area of St Malo and just to make life interesting and fun, we decided to transit through the islands of Iles Chausey.

Described as a Chaotic Archipelago this interesting pile of granite lumps contains a hand full of inhabited islands which at low water turns into a moon scape of rocks through which only two real passages exist.

Todays’ modern navigation equipment is infinitely more accurate than charts, soundings and taking bearings off planets but rest assured, go off the track in this maze and there’s always a welcoming committee of rocks just ready to rip the keel off! 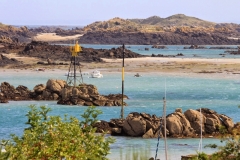 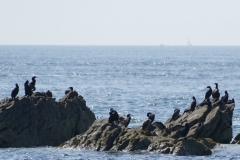 An hour of nail-biting drama later we emerged unscathed and anchored off the Grande Ile for lunch.   A few Dolphins followed us away from the islands and with the wind having turned around we actually sailed the boat – yes actually sailed …. so engine off and three hours later we arrived in St Cast.