Due to the tides we spent an extra day in Brighton, spending a great evening with Bob and Sharon and we even did the tourist bit of the Royal Pavillion.  The plan for the next morning was an early off to catch the last of the eastbound tide however when you wake up and cannot even see the harbour wall due to fog you have to question why leave a perfectly good marina.  This is reinforced when the Fisherman started coming back in because they couldn’t find their lobster pots.

Fortune favoured us again (or so we thought) as the fog started to lift we set off and two hours later we crossed the Greenwich Meridian line as we passed Peacehaven and therefore entered the Eastern hemisphere.   The charts tell us we will be here during our east coast cruise until entering Grimsby as the line passes Cleethorpes on its way to the North Pole.  We were then suddenly swallowed in sea mist!

Beachy Head loomed out of the mist briefly but as we turned for Eastbourne as if by magic we were again surrounded with mist, but thicker than ever.  Gingerly we headed north in an eerie silent white blanket trying to find the marina entrance – thank goodness for AIS and radar.

We arrived at the safe water buoy, which is about a half mile from the entrance, but we were still unable to see the piers.  It took some searching to locate the next green buoy in the thick fog which was when we realised it was not actually marked on our brand new (less than a week old) Navionics ‘fully updated’ electronic chart!   Our problem was that this buoy was marking the wreck of the SS Barn Hill a British convoy ship that was torpedoed just off Beachy Head in 1940.   This stricken vessel limped to Eastbourne where it caught fire and sunk close to the marina entrance spilling thousands of tins of food to the delight of the rationed residents of Eastbourne.   The wreck sits just below the water line with the boilers visible at low water, which was sort of where we were heading.    Using my skill and knowledge of navigation, pilotage and a natural instinct of the sea I heard an engine coming so hung back and followed a fishing boat in, claiming it was all my own work. 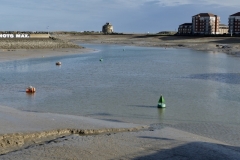 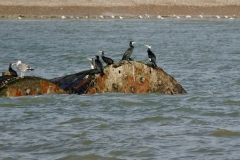 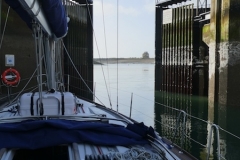