With sun shining and flat seas we chose to head for the Sark, one of the smaller Channel Islands. Having discussed the route, Nina was happy to be taken up the Percée Passage (settle down children) which is a very narrow rocky path transiting between the islands of Herm and Jethou.

Sark has a population of some 500 souls, and like Guernsey maintains its own parliament and invokes its own laws.   There is no mains water on the island with residents relying on bore holes and wells.  Cars are banned on the island, the only transportation being horse drawn carriages, tractors, mobility scooters and an ambulance (make your own mind up on that one) so there are no tarmac roads, just tracks and paths.   There is no marina and the two main parts of the island are connected by an impressive concrete bridge called La Coupée built by prisoners of war. 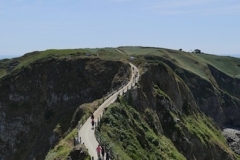 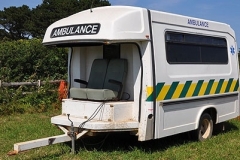 Historically, this island, as indeed all of the Channel Islands, have been fought over for centuries by neighbouring countries claiming sovereignty.  The last attempted coup being in 1990 when an elderly physicist, Monsieur André Gardes, mounted a committed solo attack on the island.   Having landed, he placed posters informing the population to prepare for surrender by Midday or face massacre.   Armed with a single gun he marched to the island’s Manor House to prepare for the handover but was met with fierce opposition in the island’s rapid reactionary force, one Police Constable Perrée.

The cunning Perrée convinced Gardes that he would only relinquish the entire island on being convinced the gun was actually loaded.   Gardes removed the magazine as final proof and spent the spent the next 7 days in prison regretting falling for such a silly trick and he was returned home.

Had that happened in today’s climate I have no doubt Gardes would have been instantly classed a terrorist, made to wear an orange boiler suit and be waterboarded by CIA officers when all he actually needed was an Ice Cream, his bus fare home and an appointment with someone to talk about “relationships”. 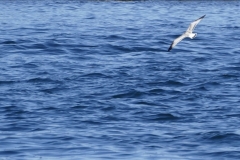 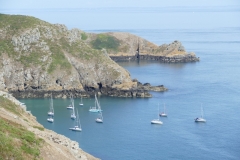 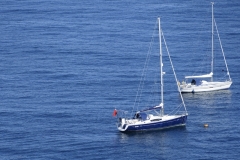 Our intentions of a quiet night at anchor under the stars in a tranquil bay were dashed when the sea kicked up a swell which threw the boat around akin to your first real experiment with alcohol when your head hits the pillow and the room goes for a spin.  You may recall it’s the same day someone tells you the ridiculous advice to keep your foot on the ground and it’ll stop the room spinning however on this occasion the floor was spinning as well.

Departure was the only solution, so we weighted anchor and went full steam ahead towards Jersey.

All alone, we rounded La Cobière lighthouse and made for the island’s only marina at St Helier as night fell.