Crossing the Thames Estuary was to be our first major navigational test, so it was time to be serious for once.   I do understand that as a yacht we are somewhat insignificant in relation to the quantity of shipping and often unseen by larger vessels.   Add to this the shifting sand banks, enormous wind farms and the fact that it is one of the busiest stretches of water in the world it became very clear that there is no such thing as a straight path from the tip of North Foreland to the River Orwell.

Our early morning departure slot from Ramsgate was crucial to the passage yet very inconveniently a dredger had hit the eastern pier blocking the way in and out and if it didn’t re-float we were stuck for a while! 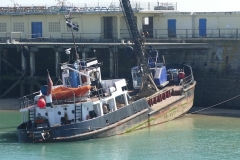 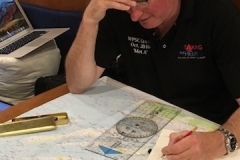 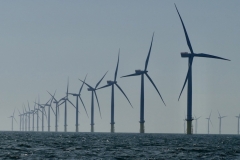 At ‘Stupid-O’clock’ the next morning (5am) I poked my head up to see the dredger had gone and so we slipped out of Ramsgate just in time to see the sun rise over Belgium as we turned north.

Our track took us through the London Array wind farm as this kept us away from the larger shipping lanes and as we exited we had to do a bit of a ‘shimmy’ to starboard (this is a well-known nautical term and slightly larger than a ‘smidge’) to get us back into deep water and turn toward Harwich and Felixstowe.    Being so pleased with ourselves at making it almost across, we didn’t notice we only had a metre depth of water under the keel although we were still 8 miles offshore from Walton-on-the Naze.   A quick wakeup call !  Following a very quick re-calculation, Nina managed to navigate us through a series of small deeper channels to arrive safely at the entrance to the River Orwell. By the first river bend the chaos of the Thames was behind us and calm took over.  This was also the first point we could unclip as it was a bit choppy to say the least,  which is why there isn’t many photographs on this passage.

We then found ourselves enjoying the river which marks the Suffolk / Essex border and home to the impressive Orwell Bridge. And yes, on arriving at Ipswich something chilled and sparkling was located on board to open.