Returning to Plymouth, it was time to head towards where we’d ended our 2018 adventure, so southwards into the English Channel we headed.   Using the basic laws of geography, and by heading due south we should eventually hit France, and preferably Roscoff, so that’s what we prepared for.

2am saw us step off UK soil and for the next 8 hours it all went rather well until about midway when the old adage was disproved – “you ‘can’ have too much of a good thing“.  So at this point I’d like to give a special thank you to the professional websites of the BBC Shipping forecast, Meteoconsult, Windfinder, Myweather2 and Passage Weather for getting it a 100% wrong! Our gentle breeze from behind became a force 5 on the nose with lumpy seas and just to add insult to injury, it rained too! 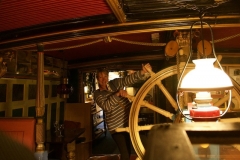 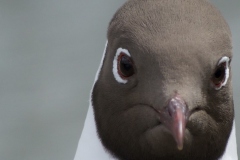 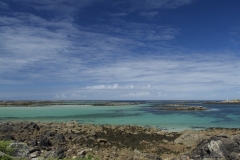 A quick rethink and we changed course for L’aber Wrac’h (which incidentally we had planned as a fallback). Although much further away, this change allowed us to make the best of the weather conditions.  The entrance to this natural harbour is described loosely as having ‘a boat munching pile of rocks’ and it is here, after 120 miles, 18 hours and with the light fading and we arrived utterly exhausted.

At first we thought a yacht had come out to greet us until we realised that the crew’s waving was a signal for help and not merely an overenthusiastic welcome.    It seems their entire electrical system had failed along with the engine and we were their last hope of rescue (Oh dear!).   As we got closer Nina made polite conversation with the skipper.  He was a rather tall attractive young man, sun tanned with chiselled features and long straggly salt ridden hair.  The sort of chap who sails bare foot in all weathers (and he was).  French by birth but speaking perfect English and no doubt being one of the many fluent languages he speaks, each of which delivered in a deep calming accent.

The reason I didn’t disturb this conversation was because I was busy lashing their boat to ours, and when I say ‘their’ I of course paid no attention to the exceptionally pretty mademoiselle who was at the helm.  I barely noticed her flawless olive skin, deep brown eyes you could drown in with a smile that would melt a charging rhino. Neither did I notice her figure hugging Bretton jumper alluring worn with the top two buttons undone, no rings on her fingers and orange nail varnish which was slightly chipped on her left thumb – no, hardly noticed her at all!

So strapped together (the boats, not us and the crew), we arrived at a very full marina. Now I may have mentioned before that it is never easy mooring in an unknown marina, but when your connected to another boat with two rudders fighting each other it gets a bit trickier.   Stepping up to the mark came our resident rescuee, ‘Anton’, who hurled a whole pile of abuse at the French crews milling ashore watching the spectacle of a two-masted catamaran.   His simple request was for the persons ashore to perhaps catch lines and others to shuffle an inconsiderately parked boat a long a bit so we could squeeze in.  In true French style, and clearly unable to understand the concept of un-contractual assistance, they merely looked at each other, shrugged their shoulders and exhaled a lot.  I noticed that following this a small group gathered within which some form referendum took place in order that a leader could be elected to take this request further.  This leader, we hoped, would then reach out to his partners to assess their core competencies through a serious of brainstorming sessions and with sufficient blue-sky thinking they could maybe, just perhaps, create a steering committee who in turn would cascade information to a rope pulling/catching team and a strategic boat moving team.  During this period of Gaelic indecision, a Swedish couple put down their beers and helped us land …… 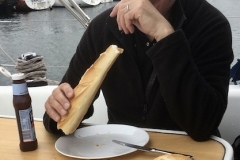 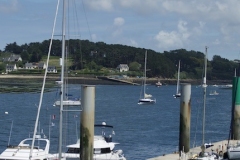 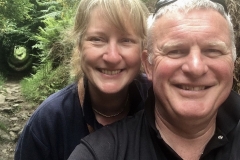 Having heroically saved the lives of these children of France and embellished the facts sufficiently I was expecting the President to arrive the next morning and deliver my ‘Ordre national du mérite’, however he must have been busy. So we ate our bacon baguettes alone.