Flat seas, no wind and with the mist reducing our all-round visibility to about a ½ mile to all points of the compass we set our auto helm for a straight-line, hopefully uneventful, passage to Le Treport.   It was imperative to arrive there at High Water +/- 1 hour, due to the drying sand banks at the entrance.   Nina had done the maths and for once we were in a strange situation of having to continually slow down and not arrive too early.

Within our lonely bubble we were about six miles offshore when an exhausted and clearly lost Bumble Bee crashed onto the deck and spent the next 10 minutes lying on its side.   Assuming he had no dietary issues we thought Jam was the answer and being a French bee it had to be ‘Bonne Maman apricot preserve’ which seemed to be the solution as after spending an hour sucking the life out of it, he flew away. 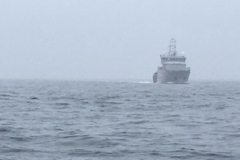 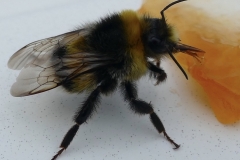 So there we were, plodding along with Nina talking to a bee and no other boats showing for miles around when, by complete surprise, on channel 16  (International Emergency Channel), someone in an outrageous French accent,  started calling our Boat Name and demanding we slow down.    Instantly dismissing Somalian pirates, I asked them to identify themselves in my slightly upper class impertinent British tone.    I was told to look behind me where a French Coast Guard Patrol Boat, similar to a small warship, had loomed out of the mist – those sneaky devils can turn themselves into stealth mode so we can’t see them creep up on us.  Needless to say, my impertinent tone was instantly reduced to one of subservience.

Fully expecting to be boarded and undergo a full document check, Nina ran downstairs dragged a brush through her hair and slapped on a bit of lippy (she’s so shallow when it comes to men in uniform).   After a dozen questions about ports of departure, destination, persons on board and names I was then asked to give a description !    I was very tempted to say “An attractive couple, taller than average, who enjoy the outdoors with a Great Sense of Humour”  however, the large fixed gun on the rear of their boat told me to ‘Grow Up’.  Assuming it was the boat description they wanted  “C’est Bleu, monsieur ”  was the best I could muster  …. they let us be on our way and Nina, with some disappointment, never did get boarded. 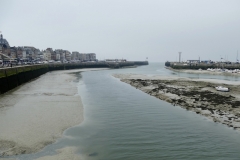 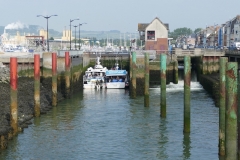 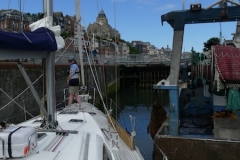 Now I’m not going to comment on my boat manoeuvring skills, or lack of, in the Le Treport Lock other than to say lots of French people now have a picture of Le Jouannet on their I-phone with a red faced skipper and Nina trying to hide behind a fender.   No one hurt, no damage and 2 beers later it became almost funny.