The locals of Cherbourg were still celebrating their 4-2 World Cup victory at 2am the next morning when we escaped into the darkness of the English Channel heading for Guernsey.

After two months in France we were heading for the Channel Islands and back to Britain, well you would have thought so if it wasn’t for the inhabitant’s decision in 1204 to remain loyal to the English Crown, but not the United Kingdom, and so they remain a principality able to rebelliously govern themselves, discard VAT, issue odd looking bank notes and paint their postboxes blue.

Back on board and having turned left (port for you Nautical folk) at Cap de La Hague we entered the waters known as the Alderney Race, a name given for good reason.   This is one of the fastest flowing areas of water in the world and can surge so fast that at times it would appear to be going downhill.   Should you decide to sail against it your vessel may look spectacular whist healed over with a foaming wake to the rear but in actual fact you could well be stationary if not travelling backwards.

Having learnt this valuable lesson once before, the simple approach is to read the tidal stream book,  work it out the optimum time to get there and follow the boat flying the Jersey flag which explains the silly-o’clock departure time.    As we passed Alderney we found ourselves travelling over twice our normal speed, with no sail up and the engine just in tick over so it wasn’t long before Guernsey loomed from over the horizon. 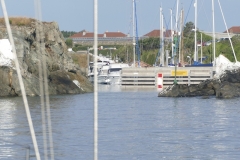 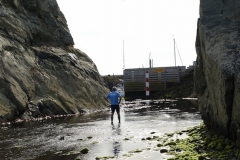 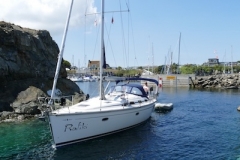 Beuacette Marina was to be home for the next two weeks.   Located on the north east corner of the island the Marina was once an inland quarry rich in Blue Granite.   In 1968 The Royal Engineers were tasked with blasting a hole in the quarry side, adjacent to the sea, and thus fill the quarry with water to create a marina.   Their modest quote of £700, and a day’s work, escalated to some £30,000, and a considerable longer period, having totally underestimated the strength of the rock.    In true British Army style they approached it scientifically in that if it didn’t go last time use more dynamite next time.  Eventually they blew it to pieces and a gap in the wall appeared.

The rock face entrance to this narrow marina is painted white so at least, when entering at night, you know what you’ve hit if your attention hadn’t already been drawn to the sound of granite tearing through the hull.   If the rock faces weren’t enough, add in the shallow entry depth, the entrance cross tide and the tight turns once in and it’s no wonder they have a handy difibrillator on the fuel pontoon to ensure the skipper’s heart can be returned to its natural rhythm before his first Gin & Tonic. Guernsey gave us the chance to visit Le Jaonnet bay and from where our boat derives its name  (See Link – Le Jaonnet Bay ) and meet yet more lovely Dutch folk.  My theory that every Dutch national is a Doctor was dispelled by Erik and Francesca but yet again their generosity, friendship and ability to consume wine has upheld our love of a fine nation of people.