….“There is nothing – absolutely nothing better than messing about in boats” …. said ‘Rattie’ in Wind of the Willows.    This timeless tale was written by Kenneth Graeme whilst convalescing in Fowey from tuberculosis.  And it was here, in a small corner of Cornwall, that we next landed and spent more days than we expected whilst making some urgent repairs to one of Le Jouannet’s mast plates.

Armed with a can of fuel, we boarded our dinghy and headed north up the Fowey River to explore its much smaller tributary, the River Lerryn.   This trickle of water meanders around tree lined bends leaving proper navigation and charted waters far behind.  It was amongst the ferns and bowers that droop to the water’s edge that was the inspiration for the ‘Wild Wood’ and where the adventures of Toad, Rattie and Mole took place.    At the very head of the river sits a sleepy collection of cottages and the village of Lerryn with its medieval packhorse bridge connecting its two halves.   Passing under this was too inviting to ignore and in doing so we arrived at the foot of someone’s garden whilst they were enjoying a BBQ. We apologised, spun round and left without so much as a sausage! 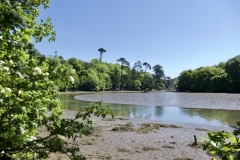 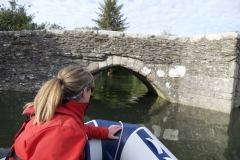 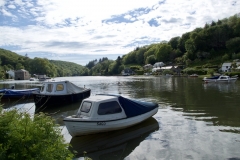 With just enough High water to take necessary refreshment for rehydration at the Ship Inn and with the sun starting to set, we left on the ebb tide dodging the May bugs to eventually rejoin the main river. 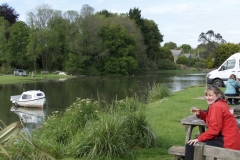 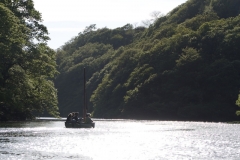 Now back to the repairs. So during our seaward passage to Fowey we thought it would be a jolly good idea not to keep a watchful eye on the electric winch and with a rogue rope looped in the wrong place, this highly powerful bit of kit managed to destroy a few bits of deck equipment, the most serious being a mast plate.

The local chandlers was not the sort of place that stocked such specialised items, unless of course under their banner of ‘all your essential boating equipment’ they consider a baseball cap sporting that hilarious caption ‘Galley Slave’ as essentials?   Our salvation lay in the internet, royal mail express deliveries, Credit cards, a friendly Harbour Master and a local repair centre who lent me their supersize pop rivet gun for a healthy donation towards the RNLI… 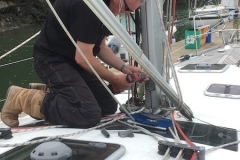 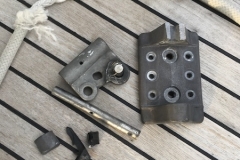 Our departure from here had the ultimate goal to reach further West than we did last year ….