Saying our goodbyes to Sienna’s crew and with the promise of meeting again soon in Jersey once our livers have recovered, we started west. After a brief overnight stop at Lymington we exited the Solent early, passing its fortress guard of Hurst Castle.  This grim, isolated building served as a prison for King Charles I before his execution in London and due to its location remained in service during both Wars protecting the western entrance to British Naval base of Portsmouth. 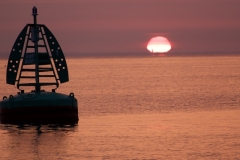 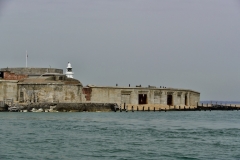 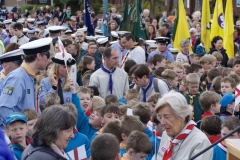 To avoid ‘Storm Hannah’ with expected winds of 50mph plus we dived into Poole where St George’s day celebrations were colourfully celebrated by the local sea scout marching band and the 2nd division airborne glockenspiels.   With time to kill we ventured to Wareham where, within a small church tucked away from view, we found the burial place of Thomas Edward Lawrence better known as Lawrence of Arabia.  Within its boundaries we touchingly found war graves from WWII of both German and British troops poignantly laying at peace side by side.  Nina also spied a lovely looking house for sale, but that’s another story …… 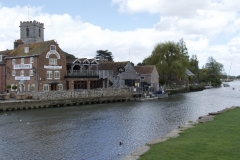 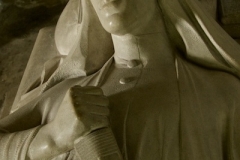 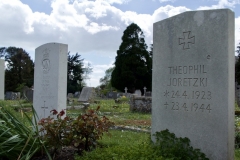 With itchy feet starting to take control and the storm now wreaking havoc up the east coast we made a run for Dartmouth.  Seventy miles of sailing lay ahead with Portland Bill being the most prominent headland to by-pass once more.    ‘It’s all about timing’ (I’ve heard that before somewhere) says the book of rounding ‘The Bill’.  It’s obviously best to go with the tide and thus avoid that chaotic piece of water known as ‘The Race’.   This convergence of water creates a sea state which I have no doubt is the cause of many a marital spat.   On the basis that our last rounding was rather lively and cost me dinner for two in Weymouth, I opted for the inner passage which claims to be a calmer stretch of water. That said, it is only some 50 metres in width and passes so close to the lighthouse and beach you can almost pinch the children’s ice-creams! 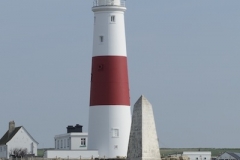 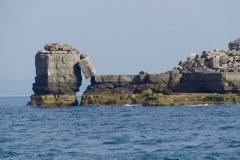 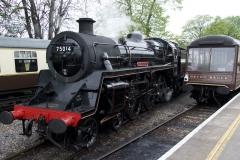 Mid way across Lyme Bay we hoisted the Devon Courtesy flag and aimed at Dartmouth.   Once again we became the spoilt guests of Peter and Sarah at Warfleet Lodge and, after more years than I can recall, we caught up with our old friends and avid readers of this blog – ‘the Pedals’.   But just hang on now,  there’s more to Dartmouth than this and who, other than a middle aged man,  could not get excited by a ride on Braveheart, a classic 4-6-0 rolling stock steam train on the Dartmouth to Paignton line – for the sake of accuracy this is a classic  4 ft 8 1⁄2” standard gauge railway – my life may now be complete.    (My therapist says I should try and forget the afternoon in Paignton and keep going West )…..