Those more observant watchers of ‘The Adventures’ may have thought we’d been stationary for so long we’d had a change of plan and decided to join the electoral role of Ipswich instead of continuing with our circumnavigation.     I am equally aware that if you’d have set off on foot the same day we left Yarmouth (Isle of Wight) you would have only have had to maintain a brisk pace of some 6 miles a day and you’d have overtaken us about 11am this morning… so perhaps a small explanation is required.

Firstly, we’d always planned to return home in the first week of May so we didn’t want to go too far north.  Also our cooker needed a repair (yes, we are well aware how new, and expensive it is – thank you Bob) and just as this was completed, and we were ready to move, the weather turned seriously grim.

Now although Ipswich City boasts a rich maritime history for world trade it is still 11 miles up the River Orwell and, you would think, a sufficient distance from the sea to be protected from the harsher weather systems which dominate our East Coast.   Several times this week we woke to find between 29 – 34 knots of wind blowing in the marina, which is a Force 7 in nautical terms.   At Harwich, which is our entrance back to the North Sea and where our future sailing plans take us, it was, according to the BBC Shipping Forecast, ‘Severe gale 9, sea state Very Rough’.  The local weather station was recording waves of 4 metres plus which is why the Wind Farm Patrol boats ‘Sea-cat Ranger’, ‘Vigilant’ and ‘Liberty’, weighing in at close to 100 tonnes each, were brought up river for protection and were moored just across from Le Jouannet. 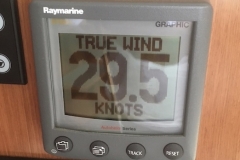 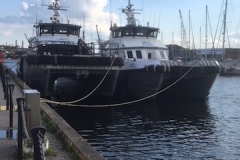 Now communication, I’m told, is key to any relationship and maintains that fragile state of morale in a marriage and the small clues about this weather system hadn’t been missed by the current Mrs Davis because just as I was about to present my passage plan using synoptic diagrams, projected forecasts, nautical charts and a very colourful crayon drawing of buoyed channel Nina – in her ‘serious voice’ – said    “If you think for one minute we’re going out in this I will personally cut your eyes out with a spoon and feed them to that Herring Gull over there” …

Being a modern man, and embracing all forms of diversity, I allow my wife to have an ‘opinion’ and in doing so I possess that rare quality of being able to listen and so I identified very few grey areas in that statement, apart from it was a Black-Headed Gull (but I kept quiet about that).

Another quickly cobbled together plan found us renting a car and visiting some of Nina’s childhood memories.  First stop Flatford Mill, the home of the artist John Constable (1776-1837).    It didn’t take long to identify Willy Lott’s Cottage and the site of the ‘The Haywain’ which is one of many local locations of Constables work.  These paintings all seem to portray a romance of the English Countryside but sadly fail to reflect the true poverty and hardship of farm working in the early 18c.    What was quite amusing however, is that on the horizon of many of Constable’s paintings, irrespective of direction or location, is that the spire of the nearby Dedham Church can be clearly seen, even in the London scenes, proving that photo-shopping was alive and well and practiced even back then! 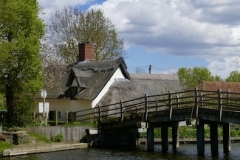 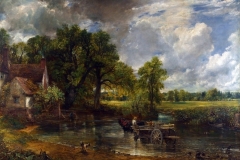 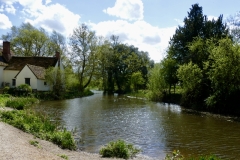 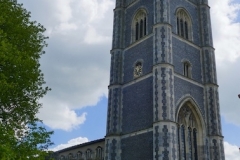 The very pretty village of Lavenham was next where I suspect every builder had the same spirit level as almost every house is either in a state of leaning to the right or toppling forward.   In the opposite direction was Woodbridge and Orford with Henry II’s castle giving stunning views of the Orford Ness bird sanctuary along with the abandoned WWII radar development centre and the massive BBC World Service aerials that seem to dominate the flat landscape.   Best of all down at the waterfront, for only £10, we managed to purchase 12 oysters and a Skate wing that was so big we had to chop it in half to cook it. 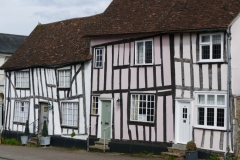 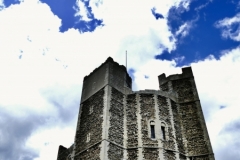 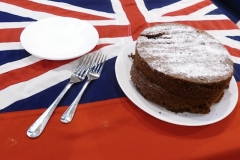 So having exhausted the Ipswich Museum and trialled the oven’s cake making ability, we returned home for ten days and whilst there the UK recorded the hottest May Bank holiday (with the calmest of seas) since records began …….. bugger !

We returned to Le Jouannet today with high hopes of moving however the 20 + knots of northly wind is back with us for at least 3 days …… double bugger !