Built in 2007, Le Jouannet (LJ) has spent her years as a charter boat, mostly under the careful care of Fairview Sailing, Port Hamble.  I know sharing a boat isn’t everyone’s idea of boat ownership nirvana however on the plus side she was moored just over an hour drive from home and the charterer income helped us to enjoy cheaper sailing.   In addition to this, because of the certificated condition she attained we were able to donate her to the Ellen Macarther Cancer Trust on a regular basis to use with their young people’s trips, an association we will always be proud to have been part of.

As the years passed, and sexier boats joined the fleet, the bookings naturally slowed down and so with our four year plan in place we took her out of charter in September 2017 for a six month refurbishment.  The first thing that hit us was the speed at which six months can pass which runs almost in parallel to how quick our savings disappeared.

The first few months were spent redesigning the front cabin to make larger beds. (we’re both quite tall) and having comfortable new mattresses made. The toilets were ripped out along with all the associated pipework and swapped to nice shiny replacements. All the old lighting went too, replaced with amazing LED’s and of course new blinds. 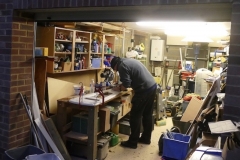 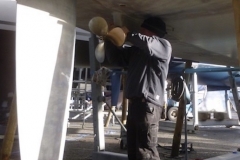 Just prior to spending Christmas and New Year out of the water in a cradle we took delivery of a unique designed stainless gantry which we fitted whilst the snow fell around us. Several weeks of scraping, painting and polishing came next along with winch and propeller servicing. Late January saw her back in the water and on that same day the mast and all of the rigging was removed for a ten year service. At the same time a generator, water maker, Mastervolt  and tracking (AIS) systems were installed.
[Show slideshow] 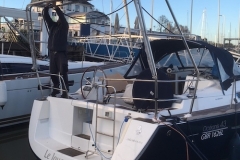 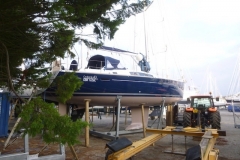 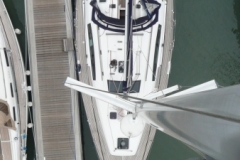 March arrived and so did the washing machine and after much head scratching we managed to crowbar that in together with Nina’s special cooker!

Were we ready by our April D-Day ? – Course not – as I’ve often been told by the eloquent Mr Hearsey of Fairview Sailing – “it’s an ongoing project” which I couldn’t agree with more.  So as we set off into the unknown we travel with tool kits, repair kits and spares galore!