Nearly forgetting we were supposed to be sailing round the UK, at 4.30 AM (Yes there are 2 x 4.30’s in a day) we were met with a sunrise, flat seas and a breeze from the north.  The BBC Shipping forecast, that bastion of knowledge and accuracy, confirmed all was good to go.   So, with hatches closed, porridge eaten and full of confidence we slipped out of the Orwell River being escorted by an inquisitive seal and (hopefully) our last look of the Port of Felixstowe.

Now, in the future, when speaking about the weather, I shall be referring to a piece of damp seaweed and the rotting intestines of a seagull that I have hanging from the anchor locker because this would be more accurate and useful than the nonsense that my licence fee had just paid for. 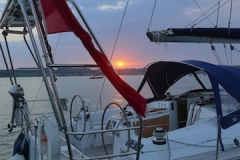 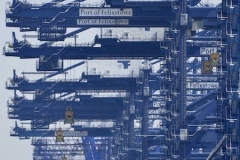 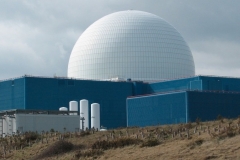 Yes, we did have a nice view of the bleak outpost of Orford Ness lighthouse and Sizewell B but then the predicted ‘Maximum Gust’ of 16 knots turned into a continuous 5 hour blow of 25 knots and if that wasn’t irritating enough we then enjoyed numerous waves breaking over the deck after the BBC claimed that the Sea State was ‘slight’.   Due to this ‘puff of wind’ being on the nose, and effectively pushing the boat backwards, our 6 hour passage took just over 8 hours meaning I owed Nina dinner throughout which I continuously told her how attractive that wind swept look was these days (modern man strikes again).

So where are we you may ask ?    We’re in the easterly most point of the UK, a place where ‘Pound Land’ took ‘The 99p Shop’ to court claiming it was destroying the local economy and a place where all the females in your family are the same relative.