Leaving the Rade de Brest we briefly visited Camaret-Sur-Mer which sits just outside the bottlenecked entrance to the huge natural harbour.  Due to its unfortunate location, this small town has been fiercely fought over and defended in every European war involving shipping for centuries.  Sadly, Camaret has now become a quick stopover spot for ‘yotties’ heading south whilst awaiting a weather window to round the Raz de Seine and equally where proud old wooden fishing vessels come to die on its beaches whilst watching the modern fleet of steel boats pass by. 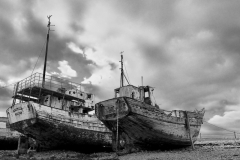 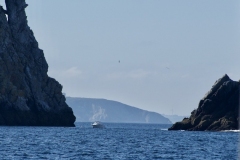 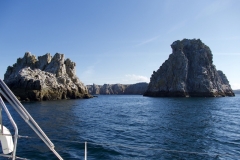 En-route is a rugged coastline with a series of rocks extending into the sea known as Les Tas De Pois. These rocks bear a similar appearance to the Needles, the difference being that you can pass between them as long as you’ve counted correctly from seaward, or was it from the land?  It’s so helpful when the French marine guide book dedicate pages of artistic pictures of seagulls and old men playing boules rather than the rocks that are about to tear a hole in one’s gel coat!

The tides and weather precluded us from our passage through the Raz for a few days so we headed to Douarnenez, the home of France’s largest Sardine packing factories – Yes I know, it’s a non-stop stream of surprises for Nina!

The Raz de Sein was rounded one very bright morning having departed Douarnenez at stupid-o-clock.   More feared than the Chanel du Four and with lifelines attached we entered a flat calm sea more reminiscant of a conveyor belt of water, and soon found ourselves doing over 14 knots with only a whisper of wind.  The sheer size of the lighthouses is testament to the force of water that must be respected in this small but treacherous headland. We gave thanks for our luck and pushed on to Sainte Marine and Bénedot.

We had been warned that Sainte Marine has a reputation for strong tides and mooring a boat was a waterside bar spectator sport and certainly not to be attempted at the point of time that we arrived (mid-tide).   Being an ‘old-hat’ on mooring in the Rivers Hamble and Medina, I cast aside these warnings with the confidence of Monsieur Franz Reichelt who in 1912 jumped off the Eifel Tower to personally test his new invention – the ‘parachute’ …. We turned to face the tide and promptly went backwards due the sheer torrent of water flooding in.     Unlike Franz I had time to absorb the pros and cons of all the information being presented to me and realising that my confidence outweighed the ability of the engine to fight the tide we carried on up river dropped the Spade SL120 anchor and had a leisurely swim until things calmed down.    Sadly, Monsieur Reichelt didn’t get a second chance as his descent was slightly more rapid than he’d calculated, the dent in the ground being testament to his bravery! 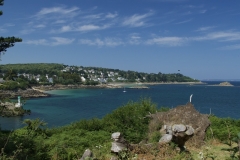 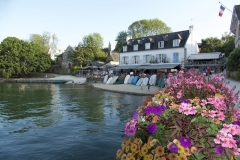 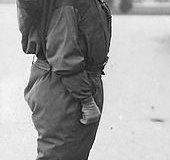 It seems that south of the Raz de Sein, France takes on a different feel as we discovered in Sainte Marine.  An atmosphere of the Mediterranean surrounded us and at last we felt we were heading for the sun. To celebrate, I took my fleece off!

With wanting to reach Vannes for the Bastille Day celebrations we continued south.