October was just round the corner and as midnight struck on September 30th the French tourist industry abruptly shut down.   Tables and chairs were stacked and chained to walls of now silent cafes.  Sun awnings were wound back, lights turned off and the ‘ouvert’ sign was spun to ‘ferme’.

We were back in the Vilaine with a week to kill before being lifted at Folleux and our flights home from Nantes airport.    Our normal winter shut down procedure involved parking in the River Hamble, driving home and deal with it another day – Oh how we’ve been spoilt!    This time Le Jouannet was going to spend the entire winter in a cradle, and further away from us than ever before. 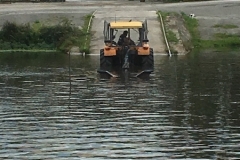 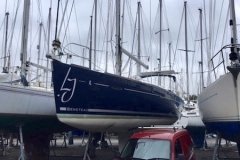 Prior to this undertaking we’d spent a happy week at Rieux in the company of Debbie and Nick who’d discovered a washing machine that for reasons no one could fathom would work without the use of any coinage.     This poor machine could be heard humming from early morning to late in the evening whilst anything from Bed Sheets to Ropes got shoved in and if Nick could have got his main sail in I’m sure that would have gone for a spin as well!

With the sniff of a something free, more ‘Brits’ arrived and apart from washing machine allocation times we all played the ‘Look whose coming for dinner’ game with each evening’s feast getting more elaborate.  Nina went early thereby reducing her stress levels!  Coffee was taken each morning in the local Tabac from where we watched the rain running down the windows plainly confirming that the sailing season was clearly over.

Returning to a near deserted Folleux, it took a few days to strip the boat. It was certainly a challenge to store everything inside and prepare for the lift which was to be the final (and nerve wracking) experience of a year of full of memories.

So here’s how it goes … Attached to a tractor is an enormous trailer which Ronan (the yard manager) reverses in to the river.  The trailer disappears underwater and can now only be located by two plastic vertical plumbers’ pipes with a ping-pong ball on top marking the corners of the trailer.   The trailer is now so far in the river that there’s water lapping around Ronan’s feet who is still sitting in the tractor.     You drive the boat between the plastic pipes which as you get closer to you can no longer see so you send a very reluctant wife up front to guide you in and when you can go no further you assume you’ve connected with the trailer, hit the tractor or worse, grounded!   The trailer is then raised and grips the boat – which can I remind you, you are still on – everything is then pulled out of the river by means of a massive winch and a wheel spinning tractor.

You remain on the boat whilst the trailer bounces across the road into the yard.   Ronan then puts a ladder against the stern where upon Nina attempted to control her knees from shaking as she descended the ladder and missing the last two rungs she fell into Ronan’s arms….

And then the work starts all over again. 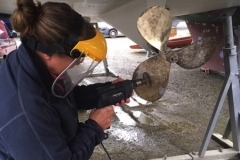 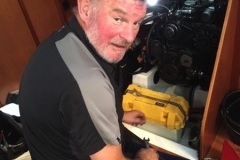