It can only mean ‘The Velzians’ are on their way!

And so it was, after three years of missed opportunities and crossed paths that ‘Le Jouannet’ and ‘Blue Spirit’ with her humble crew of Sophie & Alastair Velzian, came together in the same marina at the same time.

Port du Crouesty sits at the entrance to the Morbihan sea and marked Blue Spirit’s furthest point on their amazing 2019 adventure.     It took two attempts for us to get there from the River Vilaine having been hampered by a beasting northerly wind. We arrived first, in the pouring rain, long before many boats had had a chance or even contemplated leaving. We secured a good spot in the most chaotic marina seen so far and then spent the next four hours fending off random boats so Blue Spirit could raft against us. 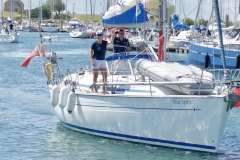 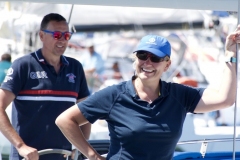 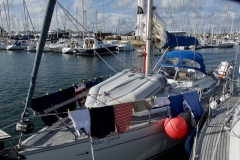 As the sun came out, with shore-lines and spring-lines secured, the Champagne corks flew, Oysters were chucked, Muscadet flowed and bread was broken.

Alastair and I spent the evening attempting to trump each other with more and more ludicrous tales of sailing derring-do.  The entry level subjects all being covered such as ‘Impossible parking spots we’ve slipped into’, ‘Engines we’d stripped down at sea’, ‘unblocking heads’, ‘friends and acquaintances!’, ‘Blush pink trousers’ and anything that involved being out in a F9 or above!   The ladies, I had observed, were watching and listening dutifully and I deduced were either in awe of these two giants of the sea or merely considering their private feedback for later (I’ll leave the reader to guess which one was correct).

As the night passed and the Highland Whisky emptied leaving nothing for the angels, we crept off to our respective beds hoping that our cabins weren’t going to spin the moment our head’s hit our pillows!

Still the right side of midday, but with insufficient recovery time having passed, two slightly subdued boat crews emerged into the daylight with mouths drier than a badgers backside and all claiming that age old hollow promise of…   “I’m never drinking again”….. 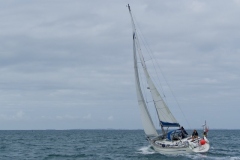 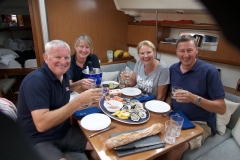 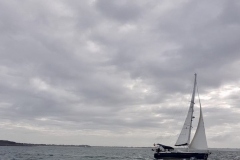 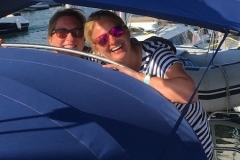 With sunken shoulders and a shuffling gait seen only by prison warders escorting the condemned man to his execution, I took the empties to the recycling bin.  The bottle bank’s empty steel chamber ensured the entire marina could count the bottles as they exploded not just within this chasm but simultaneously within the deep temporal lobe of my migraine, causing me to wince with each boom, each one slightly louder than the one before.

Sophie claimed to be fine, however it was only with Alastair acting as her interpreter and carer, who recognised through blurry words the sound of “Croissant” and “two Pain au Chocolat”  .. That said, we, and indeed most of C pontoon, heard the next utterings of  “NOW Alastair, NOW !” …..

As the Paracetamol eased the pain, a rain lashed Crouesty was viewed through port hole windows.    Our only achievement of the day was to reach the Intermarche so as to restock with more Oysters and Champagne and with our earlier vows forgotten, we did it all again…..

A drizzly morning saw Blue Spirit and Le Jouannet bid farewell as we moved out simultaneously. On roughly the same course and with men on the helm, an informal race was always going to take place and, to his credit, Alastair quickly conceded and whilst we headed to Quiberon, Blue Spirit started their long north bound trek back towards the UK.   (Ed’s note to Alastair – my blog, my interpretation!)

At Quiberon we met up with Katherine and Dimitri who through yet more horizontal rain were trying to enjoy their long awaited French August Summer Holiday. 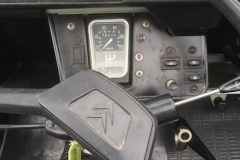 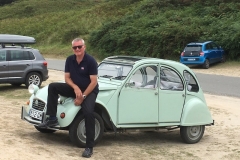 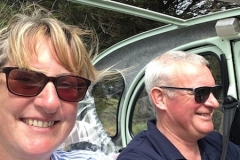 They treated us to ferry tickets to Belle Ile, the largest of France’s Atlantic Islands, and a hire car for the day.   On saying a ‘Car’, it did consist of four doors and two seats but that’s where the similarity ends.   Sitting shoulder to shoulder, we viewed the island from within a Citroen 2CV – (‘deux-cheveaux’ or ‘two horses’ being not far off the horsepower!).    It’s difficult to review how to drive a pair of deck chairs strapped to a tin plate with a bicycle wheel in each corner other than to say that, if we were to meet the Duke of Edinburgh at a T-junction, we would at least die together.

This icon of a car that was in production for over 40 years with the design brief being that a basket of eggs could be carried over a ploughed field without breaking!   We didn’t test this theory as we spent most of the day trying to understand what the flickering dashboard lights were trying to tell us.  Even the smallest of hills were tackled with a big run up and braking was a skill in forward planning.  Overall an exhausting day, but we did find a nice spot for lunch ………….. 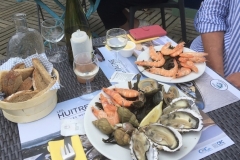 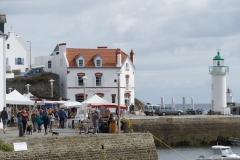 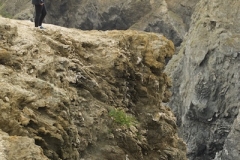 Our time in Quiberon coincided with yet more fireworks to celebrate Assumption Day and after watching from the boat we all retired to Havel Towers to enjoy a BBQ’d selection of local delicacies, some of the more curious meat selections were presented in phalic shapes and required a rather adventurous or immune taste palate!