Four hours from St Cast and after rounding the Cap Fréhel is St Quay Portreax our next port of call.    On entering, yet again, my French skills at numbers got the better of me again as when asked how long LJ’ was I said ‘trente metres’ when I should have said ‘trieze’.    Once the Capitinere had stopped scouring the horizon for the luxury 30 metre yacht, and his laughing subsided, we were escorted to a resident’s pontoon and slipped alongside LiLi, a brand new and very shiny boat owned by Phillip and Nicole.

We liked Phillip, this is a man who sold everything for the Live aboard life and bought a palace on water.   Only a month after taking possession he and Nicole (brand new to sailing) took Lili to Portugal on the basis that if you’re going to test something, test it properly.   Courageous, Daring, Mad ? you have to make your own mind up but it’s hard to judge people who live their lives for adventure.  Always smiling, incredibly generous and great company Phillip and Nicole – we wish you well. 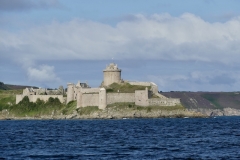 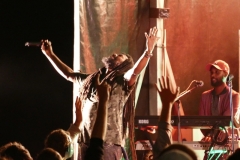 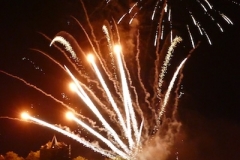 Our arrival here coincided with the 15th August Bank Holiday celebrations of Assumption Day.  If my observations and rash investigation is correct ‘Assumption’ is the Patron Saint of Reggie Music evidenced by the performing talents of ‘Omar Perry and the Soul Nation Band’ who kept the town rocking late into the dark hours.   The encore was followed by any leftover fireworks from recent world cup glory celebrations being ignited at what seemed an uncomfortably closeness to a coastal house.   So yes, we at our age, went to a gig…

St Quay was also where we discovered the GR34 footpath.  Similar to the South West Coastal Path, this trail is over 2000 km long and was originally constructed for custom officers to patrol the coastline for smuggling.   The path starts in Mont-St-Michel and ends in St-Nazaire and takes the walker through secret gardens, farmers back yards, narrow country paths and across small intimate bays.   Following the path’s signage is as much fun as the scenery as it varies from excellent to a complete mystery with anyone’s guess as to where the trail proceeds.   The poorly signed areas are easy to spot as there tends to be huddles of ramblers studying maps whilst engrossed in heated French conversations and pointing at the Sun.

Further west we entered the area of the Pink Granite Coast and explored rivers leading us to Lézardrieux and Tréguier, the entrances of which are dominated by the Ile de Bréhat being another maze of yacht munching rocks.     The moorings in both of these rivers are adjoining picturesque medieval towns which although are some distance inland the speed of the flow of water has to be seen to be believed and makes the parking of boats very much a spectator sport. 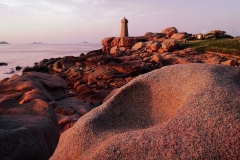 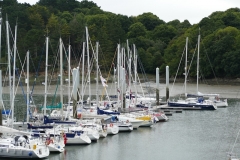 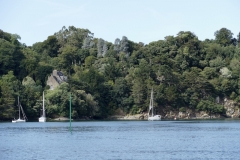 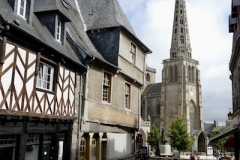 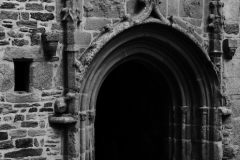 Charles and Penny assisted with our first crash landing at Lézardrieux and after the customary hellos we later bumped into them in the tourist office.  We met again at Supermarche, then the church, the marina bar and irrespective of my diversion tactics we just couldn’t shake them off!   Exploring yet more of the GR34, and while strolling through the remote countryside we found ourselves face to face with guess who?  Even after being interrogated over a few G&T’s we’re still not sure if Penny and Charles were trainee MI6 surveillance Officers and if they are they really need to brush up their technique.

From the town of Tréguier, the home to the Patron Saint of Lawyers! …  we set off on another coastal stroll and soon realised that our belief in our own fitness was outweighed by our actual ability and miles from the boat we collapsed into a tiny café in the French hamlet of ‘Nowhere’.   We had the strange notion that we could we find a taxi to take us back and so confident in this we started our familiar re-hydration process of drinking a large carafe of something white and chilled.   As the carafe emptied and whilst bemoaning our plight to each other our groans were overhead by Amy and James sitting in the corner who, being much younger, took pity on us oldies and with just the slightest of bribery they heroically drove us back to the boat.  It was a small price to pay in allowing their two lovely boys, Theo and Rupert to clamber over Le Jouannet 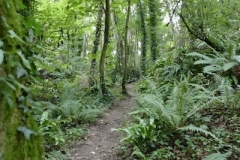 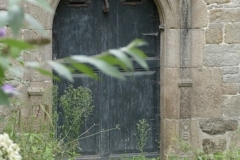 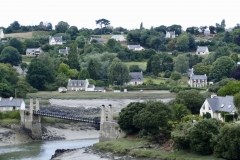 In summary to this post and to perhaps explain so many references to people we have met, we set off on this adventure to visit new places and explore … don’t panic I wasn’t just about to say … ‘and find ourselves’ …..  but what we didn’t expect was to meet so many wonderful, generous and entertaining people as we have done over the past 5 months.

I would not even begin to know how many memorable evenings we’ve spent beneath an umbrella of stars sharing stories, food and wine with these strangers.  Some would say this was fate or are they just chance encounters and the result of merely being friendly?