At last somewhere no one has heard of ! We carry 3 guide books and the general advice is that Le Jouannet is about as big a yacht as one can take into this port.   These pessimistic, frankly over cautious, authors warn you of a Sluice gate, perilous uncharted rocks, a confusing lock, drying areas, pirates, very small turning spaces, little English spoken and continuous unclassified submarine movements (Ok, so three of them may be a slight embellishment) but ‘Nina’ had done the sums, spoken to the Capitanerie, and our arrival, in relation to the all important tide level, was slicker than a jar of eels.     My psychiatrist has advised me not to talk about my boat handling skills in the lock other than to say we got in.   The Marina is shared with a lot of local fisherman who cannot seem to do enough to welcome yachts which is more than can be said for a gang of nasty cygnets who, every night, managed to hypnotise Nina into feeding them. 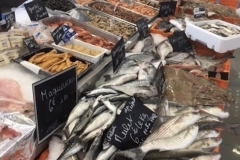 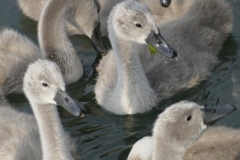 Seems only 10% of yachts that come to Le Treport are British which is a real shame.    This seaside resort claims to be the closest beach to Paris and shares a similar history to that of Brighton and the Victorian public’s day excursions to the coast.   It seems Queen Victoria visited here a few times and, it is reported, rode the funicular train which is still in operation taking tourists to the top of the highest chalk cliffs in Europe.   A fantastic fish market, small artisan bakeries and quayside restaurants add to its small-town charm.

The sea frontage houses of the neighbouring town Mers-Le-Bain is like a scene from an Amsterdam street and a short cycle ride inland took us the unpronounceable town of ‘Eu’ and a huge central Chateau with the obligatory fountains and formal symmetrical gardens. 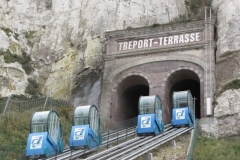 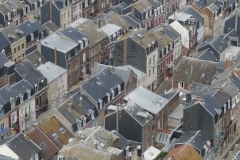 Forced to have at least one (or was it two?) re-hydration beers before our return canal side ride we were briefly interrupted by something small, buzzing with wings and fangs stinging Nina on the face, just above her eyelid.    Over the next 3 days her face swelled and the itching became seriously unfunny.  Just as we we’re about to enter into the complexity of trying to get medical treatment in this small town, we discovered that there was a Doctor on a neighbouring Dutch yacht who sorted her out and it only cost us wine, beer, Saussison and a Hangover.

I cannot let it go unmentioned that our new traveling GP’s boat name is   Slartibartfast …… So if you’re about my age and you still have some memory left you’ll know who that is and so a pleasant evening was spent discussing Pan-Galactic-Gargle-Blasters, Zaphod Beeblebrox, Paranoid Androids and why Africa doesn’t have Fjords, all of which left Nina somewhat silent (Basically because she hasn’t read the Hitchhikers Guide) but still didn’t stop her getting a piece of the team hangover!