Having managed to navigate around the Chanel du Four and constantly seeking a challenge, especially after Kim and Ann on Ilanda got there first, we looked at taking Le Jouannet the length of the River L’Aulne, and into the centre of Chateaulin which is some 15 miles inland.  The journey would take us through farmland, a wildlife sanctuary, under impressive bridges, several heart stopping sets of electrical cables, a lock and a short section of the Brest and Nantes Canal before arriving at the town centre.

Now please pay attention at this part – Navionics is the marine chart plotting system on which all ‘Yotties’ rely. It does not however extend up this river and nor is there a paper chart to follow.   Navigation seems to be based on vague pencil drawings, word of mouth and rumours with tidal heights being scientifically based on drying seaweed and counting black cats walking round Yew trees at midnight! 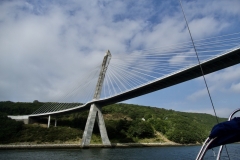 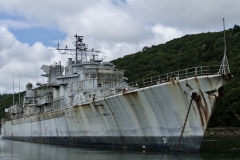 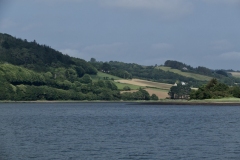 We started by anchoring just west of the Terenez Road Bridge alongside a fleet of decaying French War ships awaiting the scrap heap!  It was sad to see these once majestic machines laying abandoned, rusting and reduced to being home to squatting seagulls.

Leaving this eerie graveyard behind, we headed west and very quickly, dropped off the edge of electronic navigation.    We cunningly left at Low Water so that we had the tide follow us up river, the plan being that should we hit the mud, the rising water would eventually lift us off.   Additionally, we stuck to the outside of bends in the vain hope this would be deeper water as we rambled along all alone enjoying the serenity of this river as it weaved through the French countryside. 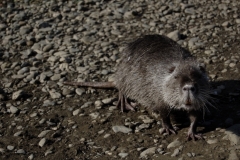 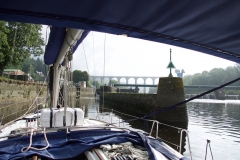 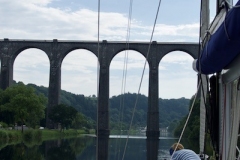 As it narrowed, we entered a wildlife sanctuary abundant with Herons, Redshanks, Curlews and the occasional Coypu (introduced into the UK in 1929 from South America but since eradicated from our shores due to their destructive nature).  Three hours after setting off we eventually got to the Guily Gaiz Lock and the spectacular railway viaduct beyond.  As the lock gates opened, I proceeded forward only to realise that I had clearly pushed my luck too far as we majestically ran aground in the approach channel.    With nothing to do but wait for the Earths gravitational pull with the moon, the tide came in and we lifted off and entered the lock much to the hilarity of the Lock Keeper.  Somehow a chorus of ‘Rule Britannia’ didn’t seem appropriate at this point! 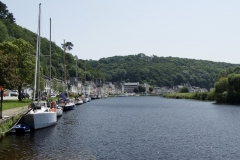 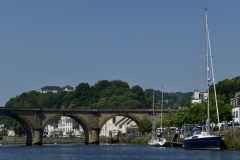 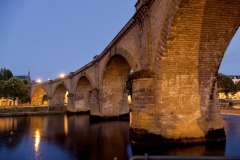 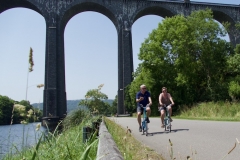 Passing under the extremely tall viaduct and the village of Port Launay we found Chateaulin and our journey’s end.   The Harbour Master wandered down to explain that as Le Jouannet was such a pretty boat and made the town look good we could stay for free – I nearly passed out.

This picturesque and quintessential French village was a welcome break from the chaos of marinas and bouncing around on pontoons.  And it was here during another balmy sunny evening we enjoyed the special company of Jens and Simone which was reward enough for the trip. 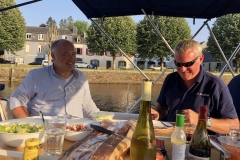 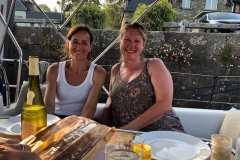 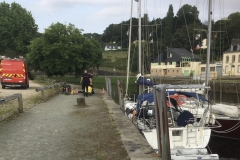 I won’t mention the Dutch boat that rafted against us and then promptly started to sink. Nor shall I mention the local fire brigade who trampled all over Le Jouannet carrying pumps to save this boat and how Nina ensured the officers were all sufficiently hydrated and regularly towelled them down due to their muscular forms – it’s not like me to be dramatic.