Whilst putting away the Channel Island money and opening the ‘Euro’s’ wallet what would you say when you expect to find an empty pocket and instead you find €60 staring you in the face .. things must be looking up.. 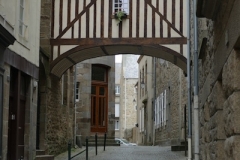 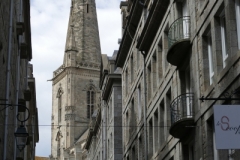 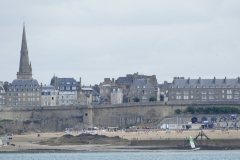 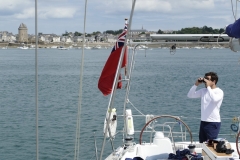 Obviously the 3 weeks back in an English speaking environment had allowed me to slip into a false sense of confidence in my French observational skills as the next morning I boldly strode off to get the morning croissants (a blue Job).  I may have previously muted re my difficulties with French numbers and in particular when prices are hurled at you faster than you can comprehend.   Fortunately, being a progressive country, most shops have electronic tills which display the price on both sides, thus compensating for the inadequacies of the foreign idiot standing before them (i.e Me)

Having delivered my normal, and well practiced, phrase of … ‘Quatre Croissants et un Baguette, pour favor’ … I was swiftly presented with four of the correct pastries and a metre length bread stick – so far so good.   The expected incomprehensible numbers where hurled at me, I smiled and peered down at the register and saw 9.46 …. a bit pricy I felt, but still I handed over the necessary coinage to complete the transaction whence I was immediately handed back €6 !    After a short period of silence and confusion I realised it was quarter to ten in the morning and I was looking at the time on the till register and not the price.

In the most eloquent of English, I was then informed by the rather attractive assistant that had I arrived earlier in the day then my purchases would have been much cheaper.   I bid her good day and never went back.

It was here, in St Cast with the steepest walkways we’ve ever seen, that we had our first visitors on board in the shape of Emily & Guy and whilst on a day sail to St Malo with a stopover for Lunch we reached our furthest point south so far being just off the beach of Dinard. 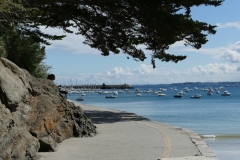 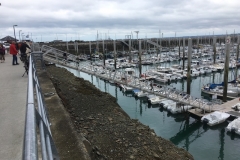 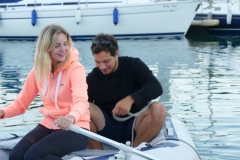 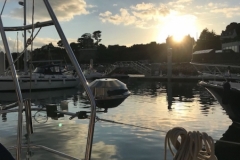 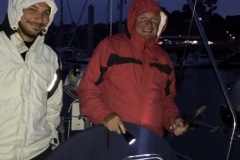 Later that evening with ‘the children’ showing far more skill in rowing than my yacht parking we lit the BBQ which immediately signalled a rain shower so in true British style we continued as if nothing had happened whilst our French neighbours, remaining dry and peering quizzically from under they canopies probably wondered how on earth we’d ever had an empire. …………………