“Let’s be brave and not go to Marinas for the next two weeks, we can anchor at night and explore secluded rivers”…. this was another one of those seemingly great ideas that are agreed upon during a libation – or three.    It all sounds like the stuff of dreams and adventure with exciting times laying ahead by merely adopting a more bohemian lifestyle.  At this point I’m not sure we were quite ready to change our names to ‘Free’ and ‘Rainbow’, knit our own yogurt and join a commune to plot bringing down the proletariat.  Our surface level of ‘roughing it’ would be to perhaps wear t-shirts two days running and use pre-packed flat leaf parsley instead of fresh.

For the non-sailors amongst my 3 readers, in abandoning Marinas we are saying goodbye to places where you have as much electricity and water as you want, showers are in brick built buildings and nearby shops, by convention, are situated on solid ground.   On Anchor, hanging off buoys and river pontoons none of the above apply. Everything is transported by dinghy and you have to be ‘organised’ (adjective: organised…. “able to plan one’s activities efficiently” …. (English Oxford)). 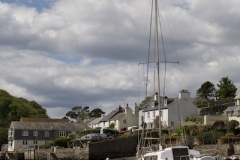 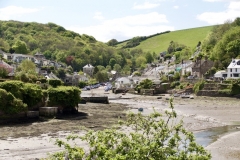 Our first location on this trial was the River Yealm which wasn’t the toughest of places to start but a few days attached to a river pontoon and having to take the dinghy to the pub constitutes some form of effort, so scores a point or two!

The River Tamar was next and having passed the huge naval bases of Devonport we turned left onto the River Lynher to spend a few nights at anchor in Dandy Hole.  The guide book told us to “keep the final G (Ince) to Stbd then St 215o to 3.5m LAT & Gd hld on Md”.  All very self explanatory I think you’d agree!   What we found was an area of the river which has a deep water pool which, at Low Water takes on the persona of a rather large puddle and here you sit awaiting the next high tide if you want to leave.   And so, as the sun settled down behind the trees and the water disappeared for the next twelve hours we enjoyed the bird song and nothing but nature itself. 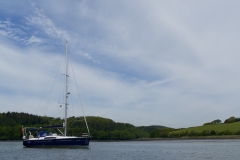 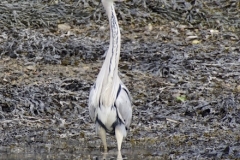 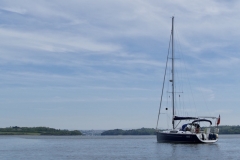 Exploring further up the Tamar we passed under the Royal Albert rail bridge built by Isambard Kingdom Brunel in 1854 and its lesser attractive neighbour the Tamer Road Bridge.    Passing under bridges is always a breathholding moment especially when you have 20 metres of mast sticking up from the centre of your boat.  The obvious question quickly crosses your mind  “Are we going to fit underneath ?” . Fortunately, charts show bridge heights, however whilst the main structure traditionally doesn’t move, the incoming tide irritatingly raises and lowers your vessel thus reducing the available gap and gives the illusion that a collision is imminent.    Although we cleared these bridges by some 10 metres you’ll have to agree it still looked a close shave. 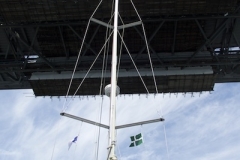 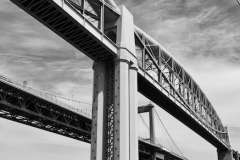 A few miles upstream we met another structure spanning the river.  This time it was Electrical Pylons which again have recorded heights, however the cables are subject to a bit of sag depending on the heat of the day.  The chart gave a clearance of 21m so what kind of fool would pass under a 500,000 volt cable on a boat with 20 metres of aluminium mast pointing directly at the power line?

We both held our breath, waited for the bang and, after nothing happened, found ourselves up river surrounded with boats infinitely smaller than us!  We quickly decided not to push our luck further and claiming our safe passage was based on precise mathematics and our accurate tidal predictions, we spun round and went back under before the tide came in anymore!

So far it’s been 4 days and no marinas with our next stop at Fowey..